Tens of thousands of potential students across China were reached. 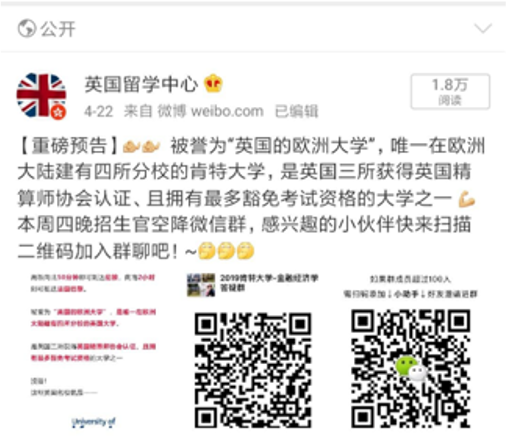 The University of Kent, UK’s European university, is one of the country’s most dynamic universities. Established in 1965, it now has 19,860 students studying at its various campuses in England and its continental-European sites in Athens, Brussels, Paris, and Rome.

The University of Kent approached RedFern Digital to support them in better engaging with their existing Chinese students as well as to support on developing and executing several social media campaigns. This was part of a broader initiative to help drive awareness and increase enrolments from potential Chinese students.

RedFern strategized and executed The University of Kent’s China social media activities as well as launched a number of campaigns that received strong engagement and lead generation, reaching tens of thousands of potential students across China. In recognition of RedFern Digital’s efforts, the University of Kent awarded RedFern as the partner of the university in 2019.